Porch Stories – The Art Of Placemaking

The Creation Of A New Island Community Begins

Porch Stories – The Art Of Placemaking 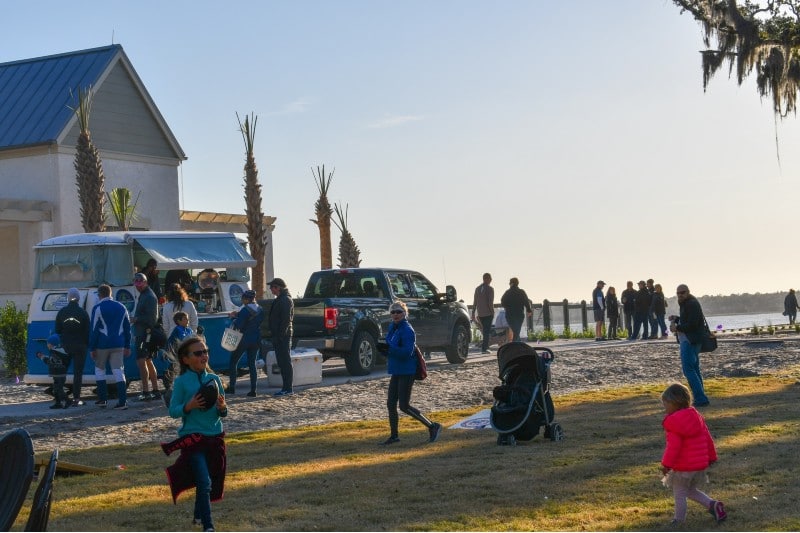 It is safe to say that more than anything else, people simply yearn to be happy with themselves, their partner, their families, their homes, their neighbors, and their surroundings. The art of place making is about creating a context for that happiness to occur on every level. In many ways, a place is defined by its architecture and how that architecture embraces textural shifts as it evolves from one generation to the next. Yet, there is more to it than that. Place makers are intent on designing environments that allow an architectural style to exist in perfect harmony with its natural surroundings, that offer the possibility of connecting with other people, and that foster a lifestyle that enhances the physical, mental, and emotional wellness of those who choose to live there.

In 1982, Jim Strickland founded Historical Concepts, a land planning and architectural design firm with offices in Peachtree City and Atlanta, Georgia. From the beginning, Jim has been committed to creating timeless homes inspired by historic precedent and informed by the grace and charm of the South. Historical Concepts created the site plan and established the architectural guidelines for Crane Island, a 185-acre luxury private island situated on the Intracoastal Waterway literally just minutes from Amelia Island and Fernandina Beach, Florida. The island is accessible by car and by boat. With nearly 45% of the land reserved for common areas, parks, and hiking/biking trails, the island will include just 113 low country style residences when fully developed. For Jim, place making is not something that can be quantified.

“I almost think that place making is another term for surreal,” he said. “It’s not something that is really tangible. It’s something that is. It occurs. It happens. It happens as more people become involved. I’ve been doing this for a lot of years. At Crane Island, we want to create a place where people want to come. Happy people live in great places. Crane Island is not like other islands or other communities that don’t have any character. When you don’t have character, you don’t have soul. I think that Crane Island is a soulful place people are going to love to call home. They’ll be there with their children and their grandchildren. They’re going to want to leave it to their children. It’s going to be a generational thing I believe. As we look at what Crane Island is becoming, our firm couldn’t be any prouder of creating a place that is full of character. For us, it’s a dream. It’s a dream come true.”

“We toured Fernandina Beach and we toured Crane Island,” said Ryan. “We were immediately taken by the natural beauty of the island, particularly the tree canopy. We knew we couldn’t destroy that. We needed to create a place that was embedded in that beautiful setting without diminishing the setting. I’m actually from the coast — Beaufort, South Carolina. So, I always gravitate towards the Spanish moss, the palmetto ferns, and the marsh. It was like home for me walking that site. Our firm has put a lot of work into the low country up and down the southeastern seaboard. We very much at home working in that kind of environment.”
“When I walked Crane Island for the first time, I was so impressed by how pristine and beautiful the Island is and by its stunning natural setting,” said Jim. “I kept saying ‘Oh, yeah!’ It was clear that the developer was committed to preserving and protecting what was there. They wanted to make it possible for the residents to feel a sense of joy full-time while living there. As we walked, it was apparent that our land plan and architectural guidelines needed to embrace the distinctive historic characteristics of the Island and create a sense of wholeness. If we put the same thing everywhere that leaves nothing to discover or any places to be with your neighbor, it could start to become really, really divided.”

After touring the island, Ryan used a survey commissioned by the developer that included the locations of the spectacular live oak trees. That survey informed the initial framework of the land plan. After a second visit during which he identified the key oak trees, he started the process of determining where the roads, homesites, and shared park spaces would go and how the park spaces could be situated around the larger trees.

“Our vision was to create a park across the island that would connect the marsh to the Intracoastal Waterway,” said Ryan. “That park is now known as Alice Park and is the heart of the community. It provides the topographic connection that we wanted by going across the island at its widest point. It doesn’t just connect the bodies of water, but also pulls the primary breezes through and into the site while providing connectivity for those who are walking or biking from one side to the other. By putting west facing taller homes along the east edge of the park, we amplified the value of homesites that would otherwise be internal lots with no real view or activity on them. The park also gave us a really unique space from which we could develop the rest of our plan. Our primary amenity, a cool amenity called River House, anchors the southwest corner of this big, beautiful park. As you approach River House from the road, we located a mail kiosk area that is another gathering place as people come to get their mail every day. Normally, we would have included a restaurant or some type of commercial activity. We weren’t able to do that based on the zoning here. It’s only residential. So we had to create activity through our amenity structures, uses, and then the green spaces that supported them.”

As the land plan continued to evolve, the architectural guidelines for the community’s residences and amenity structures also emerged. Inspired by the rich history of Fernandina Beach’s artisanal homes from the late 1800’s and early 1900’s and in the traditions of the low country that emanates from Charleston, South Carolina and south down the Sea Island Chain to Amelia Island, Crane Island’s historic low country architectural styles offer a connection to the past while providing an ambiance that encourages people to slow down, to breathe, to reflect, and most importantly, to get to know and enjoy one another on the deep porches that are a hallmark of the low country vernacular.

“Architecture makes the place,” said Jim. “And usually, it isn’t architecture done by one generation. What is the weight and the value of a particular street and how has it changed? It doesn’t change when someone puts up a McMansion. It changes when you add a bedroom or a laundry room somewhere. All of that is something that I call textural. It allows you to really write your own story, and when you do that, people don’t know why they like it. They just do. It’s also about the types of materials that are used. Place making is how one house relates to another house. Not necessarily in a straight line. It could be the proximity of the trees. It can’t be something that was done with the computer itself. It’s got to be man pushing and pulling. That, to me, is the best kind of place making. Place making is to understand. If you did an architectural design for a specific lot, you understand the vegetation, you understand the views, you’ve got to understand all these things. But at Crane Island place making means are you in the South? Or are you feeling the character of it? Is it the right thing to do? Does it break tradition? What’s exciting? How do you build it? Place making is a process. It is also not done by one person. It usually has a lot of different people with their concepts and their thoughts where it becomes an assault of thoughts. And when that happens, and you have the respect for the other person, then that’s really nice. So I think it’s been a dynamic process of different thoughts and we have come up with something with a lot in common. That is place making.”

Throughout the process, Jim, Ryan, and the team at Historical Concepts continued to focus on how Crane Island can honor the individualism of its residents while creating a powerful context that offers the possibility of connecting on a deeper level with oneself, with family members, and with one’s neighbors. Those connections will ultimately serve as the social fabric of the place.

“I believe that humans have the tendency to commune and enjoy each other and to be in each other’s company,” said Ryan. “People speak out and want a community where they can really build deep relationships and friendships with the people they care about. At the same time, people want to express themselves and have their identity be interesting so they share that with others. Clearly, Crane Island will appeal to certain people. And while those people might want to express their individuality in their home or the way they lay out their landscape, we’ve put things in place on Crane Island that encourage people to consider the whole and to protect the overall vision of the place that comes through in the master plan. We’ve got small lots, but we have large, shared spaces like River House that has fire pits, a gathering room, a fitness room, and a huge pool overlooking the river. Not every lot can have a dock, but we’ve got community docks where people can gather. The thought process is that we’re really providing a chance for people to commune when they want to, but they can retreat to their private realms when they chose to do that.

“After we created the two-dimensional master plan, we created the design guidelines and that took us to the next step of how do you create the place three-dimensionally?” Ryan continued. “How does this get built out? How do the colors painted on the structures get worked together? The design guidelines are the prescriptive guide for people to follow to make sure the overall vision comes to be. That covers from how your house sits on the lot, to how you should place your garage, and the shape of your front porch. We want to see people on their front porch where folks should be, not their garage. So how do you put the building on your lot and how do you map up your house? We want taller structures on Alice Park to frame the park and it goes all the way into some of the architectural principles and styles that make up the unique character of Crane Island. A lot of that comes from our research of Fernandina Beach and a other areas nearby that had historic patterns of architecture and landscape. That was all boiled down into these guidelines for builders, architects, and homeowners. Once Crane Island is built out, it will be very cohesive, but with a lot of moments of individuality. That’s the goal and we’re starting to see that now. You get to see the individuality of each homeowner, yet it is starting to come together to form the full vision of the place.”

To learn more about life at Crane Island, visit CraneIsland.com. For lot and home purchase inquiries, contact broker and vice president of sales and marketing John A. Hillman at 843-475-6686 or via email at john@craneisland.com. 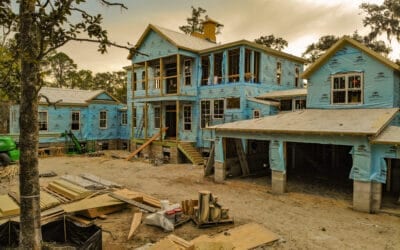 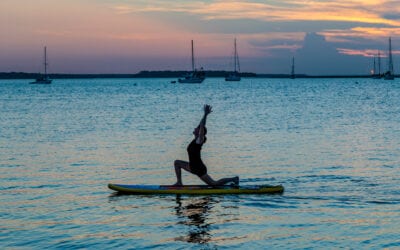 Meet Deb Cunningham  Whether atop a paddleboard by the Amelia Island Marina, on a sandy meditation mat at the beach or during a beer yoga class at Pajama Dave’s in Fernandina Beach, Deb Cunningham helps her students find perspective. As a young mom of one-year-old...